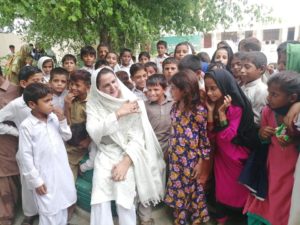 Mukhtar Mai, now an internationally renowned figure, gained her prominence as a champion of women’s rights in 2002 when she challenged the Pakistani gender status quo, demanding reparations for the violence and trauma of the state-sanctioned gang rape she suffered. Whereas before women were expected to kill themselves if they underwent such an act of dishonor, Mukhtar rose to fight for the rights of not only herself, but of all the Pakistani women living in oppression. She used the government funds allocated to her to open Mukhtar Mai’s Girls Model School, operating under the banner of “ending oppression through education.”

This has now expanded into Mukhtar Mai Women’s Welfare Organization, dedicated to helping rape, violence, and abuse survivors in need of assistance and a safe haven. Mukhtar now operates and oversees two girls schools, a shelter home for survivors of gender based violence, and countless other resources for the women of rural Punjab.

Today, Mukhtar inspires people around the world. In 2004, TIME magazine listed her as one of the world’s most influential people. The following year, Glamour named her its “Woman of the Year,” and in 2007 she was awarded the North-South Prize from the EU Council of Europe, which is granted to individuals who have “demonstrated strong and visible commitment, outstanding achievement and clear hope for the future regarding human rights protection.”

2 November 2005, The US magazine Glamour named Mukhtar Mai as their Woman of the Year.

12 January 2006, Mukhtar Mai published her memoir with the collaboration of Marie-Thérèse Cuny under the title “Déshonorée”. The originating publisher of the book is OH ! Editions in France and her book is published simultaneously in German by Droemer Verlag under the title “Die Schuld, eine Frau zu sein”.

January 16, 2006, to coincide with the publication of her memoir, Mukhtar Mai travelled to Paris (France) and was received by Foreign Minister Philippe Douste-Blazy.

2 May 2006, Mukhtar Mai spoke at the United Nations headquarters in New York. In an interview with United Nations TV, Mai said that “she wanted to get the message across to the world that one should fight for their rights and for the rights of the next generation.” She was welcomed by UN Under-Secretary General Shashi Tharoor, who said, “I think it is fair to say that anyone who has the moral courage and internal strength to turn such a brutal attack into a weapon to defend others in a similar position, is a hero indeed, and is worthy of our deepest respect and admiration”.

31 October 2006, Mukhtar Mai’s memoir was released in the United States, titled “In the Name of Honor: A Memoir.”

15 November 2006, Pakistan’s lower house of Parliament voted to alter its rape laws to move them from religious law to penal code, effectively separating rape from adultery. It also modifies the law to no longer require that the victim produce four witnesses of the assault, and it allows circumstantial and forensic evidence be used for investigation. The bill reduced the penalty for adultery from execution to a maximum of five years’ incarceration and a 10,000 rupee fine. A modified version of the bill, called the Protection of Women Bill, was signed by Pervez Musharraf in late 2006. Critics of the final version of the law complained that “a judge can still decide whether rape cases will be heard in a civil or an Islamic court. Rape victims will have to report their complaints to district courts, not at local police stations, compelling many to travel long distances. As a result, many will be discouraged.” January 24, 2007.

In March 2007, Mukhtar Mai formally received the 2006 North-South Prize of the Council of Europe for her contribution to human rights.

In April 2010, Mukhtar Mai spoke at Human Rights Foundation’s International Human Rights Forum, and in October 2010, she will receive an honorary doctorate degree from Laurentian University of Canada.

Despite her international renown, Mukhtar still lives in fear for her life, and Local tribe members continually aim to thwart her humanitarian efforts. Fortunately, she has countless admirers who continue to support her mission to replace ignorance and violence with equality and education.

This Campaign has ended. No more pledges can be made.